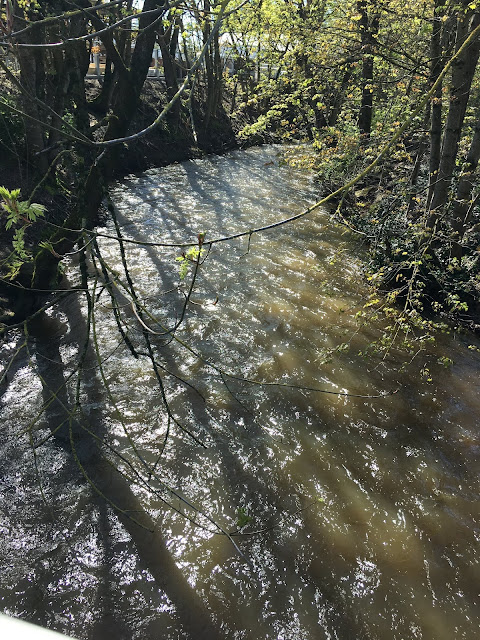 Recently I listened to "The Habit" podcast where Jonathan Rogers talks with Leif Enger. I love Leif Enger's books -- Peace Like A River, Virgil Wander, and So Brave, Young, and Handsome. In the interview, Leif describes seeing a fox near a creek in a park he and his wife walk to (starts at 10:47). He says the creek has a muddy section where you can see tracks of different animals who come to the creek, but the fox never leaves any footprints. He says, after seeing the fox, he walks down to the muddy spot to look for fox prints and there are none. Then he imagines the fox floating to that part of the shore, just a few inches above the ground. And that delights him.

What a good story, and image, isn't it? It reminds me of a scene in his book Peace Like a River where one of the characters walks off the end of a truck bed, if I remember correctly. When I read that scene, I pictured the cartoons where someone like Wile E. Coyote would run off a cliff, first continuing to run straight in the air, then suddenly, usually with a look of surprise and desperation directly to the camera, whooshes down to the ground. But the scene in the book was much more gentle. There was no sudden fall.

Leif Enger spoke at one of the Faith & Writing Festivals I attended. I remember him talking about his process of writing Peace Like a River. He said he started the book planning to tell the story of a dad and his two sons. Then at one point in the story the family was getting into their station wagon, one of the boys opened a door, and there was a little sister. She just showed up! Enger and Rogers talked about that a bit in this interview, too. Both of them said that they write outlines and invariably the plot turns out very different from what they had planned.

This is one of the reasons I like to listen to and read about writers and their process -- the way imagination works. And imagination also is the main thing that attracted me to the Ignatian Spiritual Exercises. Ignatian contemplation is all about the imagination.

It's amazing to me that this ethereal thing, our imagination, produces, seemingly independent of our own will, new stories, characters, images, and more. Some writers' imaginations produce a whole world, even new languages the people in that world speak, like Tolkien's Elvish.

Imagine God's imagination! I can't even.

I am so glad we can tap into the gift of imagination. One way we all tap into it is we live in a world, a universe, a cosmos created by God's imagination. There is no end to what we can learn from this creation -- from the tiniest, invisible atoms and parts of atoms to the huge expanse of space, from infrared to ultraviolet and rays beyond both ends of that spectrum, the sounds we hear and the "un-hear-able" sounds below and above that range, and on and on and on.

And we tap into "our own" imagination -- in quotes because somehow our imagination is from outside us, although it's inside us. Writers tap into it, and all of us do as we read and picture what is written. In our prayers we use our imagination to connect with God. Even if we're not practicing Ignatian contemplation, where we imagine ourselves in a Biblical story or with Biblical people, even with memorized prayers like the Lord's Prayer we are using our imagination. We imagine God is listening as we ask for our daily bread, and for his kingdom to come. That's not to say God is a figment of imagination, it's that we use our imagination to picture him, and sometimes even to hear him.

Praise God for our imagination.
Posted by Mavis at 9:21 PM No comments:

Where is God in a Pandemic?

Tim Keller and Francis Collins (the scientist who completed the genomic code) talk about where God is in the pandemic. I encourage everyone to listen to this! If you want to skip some introductory stuff, you can start at about 14:29.

Some notes I took with places in the video:

14:29 - The start of a discussion about the current situation and what the church can do in response, the scientific work going on, including a vaccine currently in development, and how the big pharma companies are actually working together - 18 companies working together and actually not worrying "about who gets credit and who makes money."

26:39 - Vaccines and conspiracies question, how do we get along with people who disagree with us.

29:01 - Keller: Suspicion about scientific expertise, particularly acute amongst Christians. Response must be both critiquing and affirming.

29:40 - Keller: Christians have got some reason to be wary, not so much of scientists, but of people who come trying to make a case of something and invoking science, when actually they're making moral decisions or philosophical arguments and they're cloaking it in science.

Christians look at this and say, "Sorry, science does not tell you these things." That's what you might call scientism, a philosophy that says there's nothing real that cannot be empirically proven, there's no reality outside of the natural and material.

With that history, you can see why Christians become wary when people come and say we have this agenda and it's totally scientific.

I can understand that wariness.

On the other hand, Christians should know better, and here's where I would push back.

Herbert Butterfield's book: The Origins of Modern Science. Buddhism and Hinduism didn't believe nature was real. Other religions have nature as power poles battling against each other.

Along comes Christianity which says there's one God, a personal God, who creates the world as an artist, a rational God, and it's in that soil that science can grow. There's nature, a uniformity to nature, orderliness to nature, and the reality is that it was in Christianity where the whole idea of science grew up.

Quotes Bible stories where Jesus showed he knew the difference between demon possession and sick people. He doesn't see everything as a demonic thing. Paul tells Timothy to take wine as medicine to help his stomach, God tells Hezekiah to put some figs on the boil. The Bible is filled with reasons to trust science - not scientism, but science. But I am sympathetic to the use of science to attack Christianity.

38:33 - Keller: When he meets Paul on the road to Damascus (Acts 9), he says, Paul, Paul, why are you persecuting *me*? Jesus is present in this world, particularly his people. He is still in the midst of this people and their suffering.

We don't know why he's allowing the pandemic right now, we just know it's not because he doesn't love us.

We should follow Jesus. We shouldn't try to explain why is God allowing this to happen. No Christian ought to give an answer. They should pray, help, weep, sacrifice, and be where everybody else is suffering.

Innocent sufferers like Job and Jesus. They remained faithful and that is how they defeat Satan. In both cases, Satan is defeated. If you're faithful you're defeating Satan and getting closer to God, besides helping people.

45  - Keller: Disproportional suffering. Churches need to help each other, churches with more resources help other churches with less.
Posted by Mavis at 5:46 PM No comments: 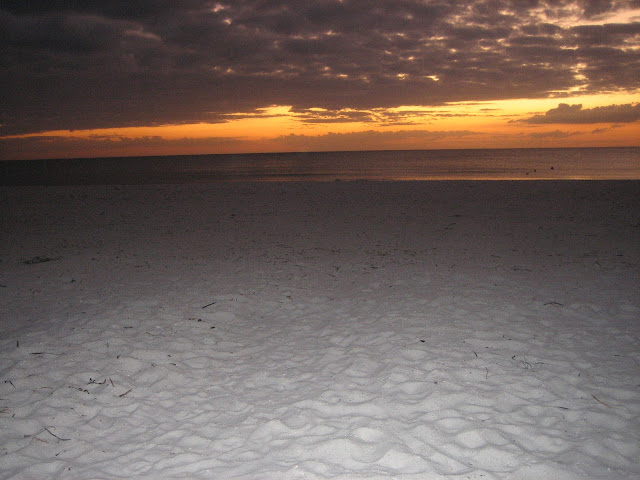 Have you heard of the French word “désolé” (pronounced dess-oh-lay)? I keep thinking about it. Sometimes I get kind of entranced by a word; does that ever happen to you? I am re-reading the mystery series by Louise Penny which is set in Quebec so the characters often use French words, désolé being one of them. It means “sorry.” I also happen to be watching a French detective series on Amazon Prime, with English subtitles. Those characters, too, say “désolé” from time to time, with the caption of “Sorry” or “I’m sorry.” It’s a pretty word, I think, but the meaning is kind of sad.

Related to it is the word “desolation,” which is used in my Ignatian studies. One of the Jesuit spiritual exercises is the Examen, in which you review your day as part of a prayer. In that examination, one question you ask yourself is whether your actions or thoughts were a consolation or desolation. The shorthand explanation for that is, Were you moving closer to God with that action (consolation), or away from God (desolation)?

As I googled désolé, desolation, desolate, and desolated, I found another meaning is abandoned, forsaken, alone. I wonder if that sense of the word is part of the reason it is fascinating me right now. We are isolating ourselves, sheltering in place, quarantining ourselves. Those are lonely words, too.

I have been thinking a lot about the concept of being sorry. Sometimes it is hard to say the words, “I am sorry.” Saying those words sometimes seems lame. I tell myself I don’t need to apologize or justify myself to someone else. But while that is true sometimes, it is also true that there are times I do need to apologize. Times I have hurt someone, or said something offensive, or made someone angry, or belittled them, or gossiped about them, or ignored them, or one of many other things we do when we mess up in our relationships. Saying those words, “I am sorry,” and really meaning them, is often the only hope of saving a relationship.

There are times, too, when I tell Jesus I am sorry. When I review my day and remember things I have said or done that take me further from God -- desolation -- I tell him I am sorry. He forgives me. Always. Thank God that when we tell God, “Désolé,” he always forgives and consoles us. He even forgives before we say we are sorry, as when he said on the cross about the people who were killing him, “Forgive them for they do not know what they are doing.”

Maybe this seems like a kind of depressing thing to think and write about. Désolé. There is a sadness about it. But somehow it is beautiful, too.

What do you think?

What is this?? A while back, I had an idea. I was thinking of some friends I wanted to pray for, but I didn't have a specific thing to pray about on their behalf. I decided to pray that they would feel God's love. I decided to send them an email when I prayed, so they'd know and be encouraged. Then I thought about my many other family and friends who I would like to encourage with prayer, and decided to start this email.
Two things I try to do:
-- Encourage you with a reminder of God's love. My goal is to avoid anything where the response is "I should..." Just a short reflection of God's love.
-- Pray for you. I'll pray with each email, and please reply to me with anything you'd specifically like me to pray for you. I'll keep it confidential, don't worry..
.     If you would like to send me specific prayer requests. I will gladly pray with you. Email me at mavis at moonfamily.cc. I'll keep all communication confidential.
Posted by Mavis at 9:42 PM No comments: