Death Decisions on my Mind 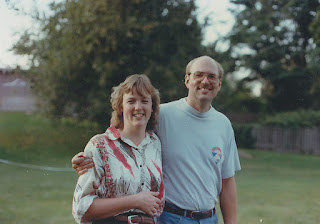 That title sounds kind of macabre, but there it is. This morning I listed to this podcast from "Hidden Brain," called "The Ventilator: Life, Death And The Choices We Make At The End." It made me cry. But it wasn't a bad cry. As I was crying, I thought, "I guess this podcast was a 'trigger' for me."

If you listen to it, you'll probably know why it made me cry. It's about a family with a wife/mom who had ALS, Stephanie Rinka. It made me think of my brother Dan, of course, as the mention of ALS always does. This woman had the kind of ALS that starts with your speaking and breathing muscles. It made me thankful again that Dan's had started in his legs and moved up from there.

I thought Shankar Vedantam, the host of the podcast, had a good point that this family's story shows how difficult decisions about how you want to die are. Stephanie and her family spoke about that subject throughout their lives and Stephanie, a nurse who had seen and experienced many different kinds of death, always made the point that she did not want to live without quality of life. When she saw someone living inside a body that didn't function, she told her husband if she ever got to that point, to "just shoot her." But when it came to actually making the decision on the spot, in a kind of crisis, it was not so easy. Listen to the podcast; it's good.

As I think about this family's story, it seems to me that, although they spoke often of not wanting to lose their quality of life, they did not -- from what the story says -- actually talk about or plan for Stephanie's death. When Dan was diagnosed, he and his wife Kathy went to a lawyer and made plans to ensure financial stability for Kathy when he was gone. They faced the fact that Dan was going to die and made all the preparations they could. I think that made a big difference.

It's not easy, though, that's for sure. Coincidentally, this evening in the "Anerica" magazine which I receive in my email, there was another story about a family dealing with ALS, "I was diagnosed with A.L.S. With God’s help, I lived to send my son to Notre Dame." The husband/father has ALS, again the kind that starts with the speaking and breathing muscles, faces the same decisions about getting a feeding tube and a ventilator, and is thankful for having decided to extend his life with both,

One woman says she never wants to live with a non-functioning body, but then decides to do just that, getting a feeding tube first, then a ventilator. Looking back, her family feels the ventilator decision was a wrong one, that caused them all more suffering. A man decides to extend his life so, if possible, he can see his son graduate. He gets a feeding tube and then a ventilator and is still living and has been able to see his son graduate. There are differences, of course, but it still serves to show that the same decisions can turn out wildly different.

Dan decided not to get a ventilator. I know he and Kathy made that decision together and all of us feel it was the right decision. Dan's death was peaceful, as peaceful as it could be anyway. All of my family got to see him one more time before he died. I took several trips to help with his care, and our parents, his wife, kids, grandkids, sister, and many family members and friends visited with and cared for Dan. It was a sad, sad time and we still miss him greatly, yet I am grateful to God for that beautiful time as he was preparing to die. I am grateful that the death of my parents also gave us time to say good bye.

What are your thoughts?
Posted by Mavis at 6:04 PM