A friend of mine told me this story about her daughter Jessica*, at about 5 years of age: Jessica had a wonderful time playing with her cousin on a visit to their home. Her cousin Matthew,* a bit younger, had a great time, too. So great that when Jessica was leaving, Matthew could not handle the sadness he felt at her going. He hid. Jessica wanted to say good bye and looked all over for Matthew, but could not find him. Finally, at the door as they left, Jessica turned around and shouted into the house, "Matthew! Wherever you are, I love you 100%!"

When I mess up, when I say or do hurtful things, I talk to God about it, I know he forgives me, and like Jessica, he tells me, “Mavis, I love you 100%!” When I doubt and question my faith, I might not feel my doubt is resolved, but I know God is saying, “I love you 100%.” When things are happening that seem evil or not in line with what I think should be God’s plan, I hardly ever figure out why these things are happening, but God says, “I love you 100%.” On that I can rely.

Recently I led a discussion of a devotional that talked about waiting. It was called “Waiting in the Tomb,” by A.J. Swoboda, who, I just learned as I googled him, wrote an entire book about the 3 days of Good Friday, Saturday, and Easter Sunday.

I have heard remarks about how, in the “great 3 days” of Good Friday, Saturday, and Easter Sunday, we tend to go as quickly as possible from the sad events on Good Friday to remembering the joyous events on Easter Sunday. In this devotional, Swoboda asks us to stop and think a while about what happened on the “awkward Saturday” after Good Friday and before Easter Sunday.

In this devotional, Swoboda wrote about Joseph of Arimathea, who, with another man, Nicodemus, took Jesus’ body off the cross and put it in a tomb. He wrote about the fact that they did this out of their great love for Jesus, even though their hopes for what Jesus would do were dashed. Then he wrote of the Saturday between Good Friday and Easter Sunday, how Jesus followers at that time did not know Jesus would rise again from the dead. Imagine their sadness and disappointment that day. Things did not turn out the way they had thought they would. They must have been wondering, “Now what?”

A friend told me his mother had been a big planner, mapping out what each family member would do and how. Then when my friend was only 18, just starting college, his mother died. He said he wondered, “Now what?” When our plans go awry, when we think we’ve got it all figured out and then...we don’t, when we are merrily on our way down the path we think God wants us to be on and then we’re stopped, we respond, “Wait! Now what?”

Really, we are in that “Wait-now-what” state all the time. We don’t know what is coming next. We have our hopes, our decisions and plans. But we never know what might happen to affect those future plans. My mother often used to add “DV” to her statements of future plans, such as “We will be out there to visit you May 5-10, DV.” DV stands for the Latin words, Deo volente, meaning God willing, or God being willing. The Muslims have an Arabic phrase, Inshallah, meaning the same thing, God willing. Even though we do not always say it, that “God willing” is always at the end of our plans, isn’t it?

To come back to the “awkward Saturday” concept, the disciples, family and friends of Jesus were living that “God willing” thing. They thought Jesus would be their Savior, Messiah, and King. And now he was dead. They were preparing his burial spices, sad, confused and uncertain as to what to do.

Swoboda encourages us to stay in that “Saturday time” before rushing to Easter Sunday. He describes it in a way that reminds me of the hymn and verses that speak of the whole creation rejoicing at Jesus’ resurrection -- “You will go out in joy and be led forth in peace; the mountains and hills will burst into song before you, and all the trees of the field will clap their hands.” (Isaiah 55:12).

Faith isn’t just Good Friday and Easter Sunday, faith is awkward Saturday, too. So much is sitting in that tomb with the soon-to-be resurrected Lord. It’s so dark. So damp. So scary. The silence is deafening.

But there is hope in there. Even the ants that normally crawled the contours of the rocks rejoiced. The air praised God. The rock, which would later be rolled away, yearned to jump for joy. The full tomb knew that resurrection was under it all. Because in that kind of dark, there’s a kind of beautiful light. Not a normal light. Not the light of the sun, or the light of a lamp, or the light of a flashlight. A different light that few can see. The light in the full tomb goes much deeper than physical light.

And in that kind of darkness, there’s a glory. In the tomb, the darkness is thick. But that’s where God is. (“Waiting in the Tomb,” by A.J. Swoboda, p. 36, Journey to the Cross. copyright 2019. Christianity Today.)

What is your only comfort in life and death?

A. That I am not my own,
but belong—
body and soul,
in life and in death—
to my faithful Savior, Jesus Christ.
He has fully paid for all my sins with his precious blood,
and has set me free from the tyranny of the devil.
He also watches over me in such a way
that not a hair can fall from my head
without the will of my Father in heaven;
in fact, all things must work together for my salvation.
Because I belong to him,
Christ, by his Holy Spirit,
assures me of eternal life
and makes me wholeheartedly willing and ready
from now on to live for him.

Learn more about the mission this song is a part of at iamnotmyown.org.
Posted by Mavis at 2:30 PM No comments:

Praise God for the enormous, incredible majesty of the Lord and for his friendship and love for little old me and you.

The other day I heard the term “cozy Jesus.” Someone complained that many people want Jesus not to make them uncomfortable, to be a soft-hearted person who just gives out “warm-fuzzies” and makes you feel good. It got me thinking. When I think of Jesus as my friend, am I guilty of reducing him to a “cozy Jesus”? When I imagine him walking beside me, listening in love, feeling my sorrow and pain, understanding me...is that making him small, taking away his greatness?

We speak and sing of God’s majesty, his immenseness. We are in awe of how great he is. I read that a tribe somewhere called God “Big-big” to try to get at the incredible hugeness of the concept of God.

I think this is one of those “both and” as opposed to “either or” situations that some people bring up in relation to God. Jesus is not either big or small, either making you feel uncomfortable or cozy, either inspiring you with his awesomeness or reminding you of his humanness. He is “both and.” 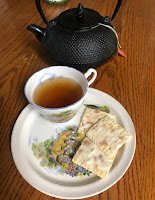 I think of the love of my mom -- my dad, too, and others I love. When I was sick, no one could make me feel more cozy, more comfortable, more knowing that I would be okay than my mom. She served me saltines and tea when my tummy was upset. She put cool cloths on my skin when I was sunburnt. She hugged me when I cried, listened when I needed to talk, all the things a good mom does for her beloved child. AND when I needed to hear I was wallowing in self-pity, she told me. When I needed to take steps I did not want to in order to improve my lot, she gave me advice. When I needed medicine I didn’t want to take, she made sure I took it anyway.

Jesus is like a loving mom. He loves us and wants all the good things for us. His actions are consistently and always towards that end, like a good mom’s are.

I often think of the apostle Peter when considering how Jesus showed his love. Peter messed up a lot. One of his biggest failures was when he denied knowing Jesus during the time leading up to Jesus’ crucifixion. In his impulsive way, Peter declared positively that he would never deny Jesus. And shortly after, he did -- three times! Just as Jesus had said he would. And when the rooster crowed at the third denial, Jesus turned his gaze across the courtyard and looked at Peter. Peter did not feel warm and cozy when Jesus caught his eye. He felt ashamed, more shame almost than he could bear. Yet, imagine Jesus’ eyes looking at Peter at that moment. His look was not gloating, saying, “See, I told you so! You better listen to me next time.” Jesus was full of love for Peter. Jesus felt Peter’s shame. He knew Peter loved him, and even when flooded with shame, Peter knew Jesus loved him. Both and.

There’s a lot of “both and” involved in our faith. We cannot understand who God is AND he became a human who we can understand because we are humans, too. God is huge, in everything, he is everywhere, AND he cares about tiny little me. Bad things happen AND God is good.

That “both and” thing is a big part of the mystery of faith. It is not sensible. It is not logical. It is true.

Praise God for the enormous, incredible majesty of the Lord and for his friendship and love for little old me and you.

Are not five sparrows sold for two pennies? Yet not one of them is forgotten by God. Indeed, the very hairs of your head are all numbered. Don’t be afraid; you are worth more than many sparrows. ~~Luke 12:6,7

PS - When my brother was a little kid, he announced, “I know what I’m going to ask God when I get to heaven!” "What," we asked. He answered, “How many hairs are on my head?”

What can I pray about for you?

Mavis
.
If you would like to send me specific prayer requests I will gladly pray with you. Email me at mavis at moonfamily.cc. I'll keep all communication confidential.

I had not heard of it, but this was the 4th "Why Christian" conference in 5 years. This is something created by Rachel Held Evans and Nadia Bolz-Weber. They and others they invite come together to talk about why they are a Christian.

I took a lot of notes in my journal. Below I will list a few quotes and memories.