We are surrounded by God’s love given to us by a “great cloud of witnesses.”


Therefore, since we are surrounded by such a great cloud of witnesses, let us throw off everything that hinders and the sin that so easily entangles. ~~Hebrews 12:1

I love that phrase, “a great cloud of witnesses.” I have heard those who study the Bible tell how important the word “therefore” is. You learn a lot by looking at what comes before the word “therefore,” which always indicates the verse is a continuation of what was said before. In Hebrews 11, the chapter before this verse about “therefore” being “surrounded by a great cloud of witnesses,” there are a series of verses that begin, “By faith, so-and-so…” Each “so-and-so” is a person of faith from earlier in God’s story -- people such as Noah, Moses, Abraham, Sarah, and many others. So, we see that the “great cloud of witnesses” is made up of the many saints who came before us. I think the cloud also includes ourselves and the others in God’s family -- and those yet to become people living in this world.

Thinking of this crowd -- this cloud of witnesses -- reminds me of the final scene in the movie “Places in the Heart.” Have you seen that movie? I had a teacher who talked about it. In the movie, several people are killed because of a sad, racially-motivated, unjust incident. In the final scene, the characters take communion together at church. As they pass the plates of bread and wine, they are suddenly passing the food to people sitting beside them who were killed earlier in the movie. The living are breaking bread with the dead. I am often flooded with emotion as I myself take part in communion and imagine the cloud of witnesses joining me, breaking bread with me -- my brother, my dad and mom, many other dearly departed ones. And the unborn ones, whose faces I cannot even picture, but who commune with me in God’s unbound-by-time world.

Once, at a baptism for the child of a young mother and father, the minister spoke of the cloud of witnesses who were also present at this blessed ceremony. You could tell the father was moved because, at those words, he reached over, put his arm around his wife, and drew her close. 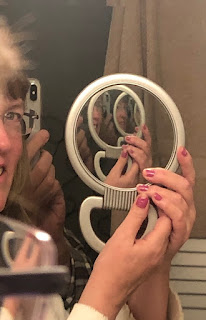 On a lighter note, I also think of the cloud of witnesses when I remember a little story I once heard. A woman was talking about how sometimes as a mom, she hears her mother’s words come from her own mouth, words she swore she would never speak. She told about one time when she and her young daughter were making her daughter’s bed together. Her daughter asked, “Why do I have to make my bed anyway?!” The woman answered, “Because I told you so!” At this point in the story she said, “I looked behind me and there were my mother, my mother’s mother, her mother behind her, and on down the line, all smiling and waving to me, saying, ‘Hi there, join the club.’” Ha ha. You know how you can see a repeating line of your own image if you hold a mirror up to another mirror at just the right angle? That’s the picture I get in my mind of that line of women ancestors. Those moms -- her great cloud of witnesses -- smiling at her in love, enjoying the ironic humor of it all.

Thanks be to God for the cloud of witnesses surrounding us with his love.
Posted by Mavis at 8:58 AM