Last night I attended a monthly meeting called the Sierra Leadership Network where the leader, Paul Vander Kley, introduces a theological topic and those of us attending contribute questions and discussions. In the course of our discussion, Paul said he had heard that C.S. Lewis once asked, “Where in Middle Earth did Frodo see J.R.R. Tolkien?” 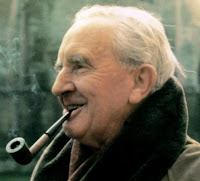 Fascinating question! The answer has to be: Everywhere and nowhere. He never literally saw Tolkien, the author who wrote the story, but all the characters -- even Frodo himself -- are Tolkien. People often theorize Gandalf is based on Tolkien, and Tolkien himself said, “I am in fact a Hobbit (in all but size). I like gardens, trees and unmechanized farmlands; I smoke a pipe, and like good plain food...I go to bed late and get up late (when possible).” (J.R.R. Tolkien excerpted from The Letters of J.R.R. Tolkien, #213) 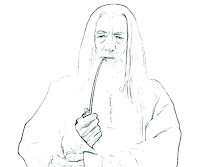 As we talked about the concept, I said, “It sounds like ‘The Matrix!’” (I must admit, I never actually watched “The Matrix,” but I’ve heard it talked about many times.) Later I thought about how it reminds me of the movie “Stranger Than Fiction,” where the main character slowly realizes he is a character in a book, and he meets that author. I remember when we were kids my brother once wondered if we were all people in someone’s dream.


Any metaphor like this -- God as the author of creation -- is limited and can be carried too far. It is fun to wonder about, though. What would it be like to meet the author writing my life, like what happened in “Stranger Than Fiction”? Could miracles be God the author interrupting the story and doing something that doesn’t fit the established rules? Some writers use outlines and write the story knowing the entire beginning, middle, and end. Others describe the process more like writing down what they “watch” the characters do, without knowing beforehand exactly what will happen. Does that somehow translate to this metaphor? Is God a writer who uses outlines or who doesn’t?


One time I read a reflection on stories about a meaningful connection between animals and humans. In one story, a water mammal (I think it was a young whale) realized a woman was struggling and might drown. The whale swam with the woman, keeping her safe until she got help. The woman described meeting the eyes of the whale and feeling as if there was true communication between them -- the meeting of two worlds.


I wonder about a meaningful connection between us humans and God. I imagine myself as if I’m swimming in an ocean but I don’t know it. Our whole world, universe, all of creation, is in that ocean. To truly meet God, I somehow stick my head above the “water” of my world, and there he is. Maybe that’s what happens when we die.


But that mind-picture makes it seem like God is something in a similar way that we are something. That was also a topic of conversation last night. There’s a story (myth?) that the Russians, when their astronaut was the first to go to space, said he didn’t see God, therefore God doesn’t exist. It may be dangerous to think we can see God in that literal way. So, even if we poked our head out of the ocean in which we live and have our being, is there an author to see? What does that author look like? What is that author? What is God?
x
Posted by Mavis at 2:45 PM