Answered prayer is a conundrum sometimes, isn’t it? Sometimes we wonder why God doesn’t answer them, or why it takes him so long, or even if he hears them. But when our prayers are answered, we know that is another reminder of God’s love for us.

Today I am borrowing a story from a podcast I heard for the first time this week, “Out of the Ordinary Podcast.” I’ve only heard two episodes and haven’t yet decided if I’ll become a subscriber, but this story, told by one of the hosts, was great. (If you love podcasts as I do and haven’t yet heard “On Being” with Krista Tippett, that is my absolute favorite!) I hope you enjoy the story, too. The storyteller, Lisa-Jo Baker, is describing a visit with friends in Zimbabwe.

It was a game farm, this huge beautiful game farm. They did a lot of photo safaris for you to come and take pictures of the animals, an “Out of Africa” kind of place. It was a billion degrees -- it’s summer in December in Zimbabwe -- and there's no AC. It's all of these cool cement floors and a billion degrees.

It is such a classic British culture that we've inherited over there. In the middle of the afternoon at 4 o'clock every day everybody sits down to tea -- hot tea! I remember we were preparing to have all these friends over to celebrate the new year and we had set up tables outside in the garden (you say yard in America). There was food on all the plates and the forks, everything set up outside because we were trying to be a little bit cooler and there were so many people coming over.

Now, at that point it was in the middle of a terrible drought. It had not rained for months and months and months. It was incredibly dry. Animals were dying, crops were dying. It was a very dire time. That night we sat down to dinner. Please picture with me, if you will, these farmers who are sitting in the heat. They were trying to make a living in a very brutal climate and they're all sitting down to dinner. 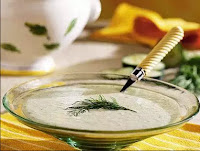 The first course (I never forget this because it seems so weird to me) was cold cucumber soup. That seems very British to me. We sit down at this beautiful table under the African night sky -- so picturesque. We take the first bite of the soup, and as we start to eat, the heavens open up and it begins to rain. I am not talking about a light drizzle -- it is gushing huge, giant raindrops. I vividly picture in my mind the cucumber soup splashing back at us.

I stand to rush into the house, because that's what you're supposed to do.I look down the table and every single one of these men and their wives are just sitting there eating cucumber soup in a rainstorm, the green soup splashing into their beards and all over their khaki clothes. They are just eating the soup and not moving. Over the noise of the rain, I yelled to my dad, “What are they doing?!” My dad said these words to me: “They have prayed for rain for so long they are not going to get up now that the rain has come.” They just sat there, drenched in their answered prayers.

“Drenched in their answered prayers.” Isn’t that such a beautiful phrase -- and image? You could also say “drenched in God’s love.”

What can I pray for you?

If you would like to send me specific prayer requests and are reading this as an email message, just reply. I will gladly pray with you. If you are reading this in my blog, email me at mavis at moonfamily.cc. I'll keep all communication confidential.
Posted by Mavis at 4:03 PM