I am HAUNTED by Flannery O'Connor!

Today, I read this article, "The Heaviness of Hope in Martin McDonagh," and thought, once again, I am haunted -- haunted! -- by Flannery O'Connor. Why does she keep coming up??! 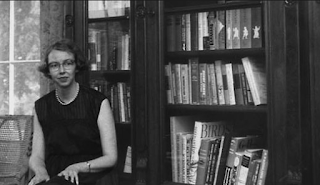 In college, my first English course -- English 101 -- was taught by a professor who must have loved O'Connor. All we read the whole semester was Flannery O'Connor. For essays, we wrote about her short stories. For the term paper, one of her novels. I had not heard of Flannery O'Connor before and this heavy-handed introduction to her writing generated respect, but I did not like her writing at all. I did not, and do not, appreciate her use of the grotesque. In that class, I got really tired of the grotesque. As the author of this article wrote, each story seemed like "a bizarre story, with sour-tasting characters and a seemingly bleak, sharp-edged ending." They did not cause me to feel the way this author did, that she could "breathe easier."

I have a friend who was an English teacher and he also thinks highly of Flannery O'Connor and influenced me some years ago to try reading an O'Connery novel again. I still just could not like it, although, once again, I respected the insights the story revealed.

Many people love Flannery O'Connor's writing -- the author of the article wrote,


I’m probably the eighteen-thousandth person on [this blog's] mailing list to declare that Flannery O’Connor’s short stories played a role in developing my language for this newfound perception of grace and the moments signifying its entry into our lives, the sanctifying it promises or in some cases threatens to do.

So, yeah, I get it, Flannery O'Connor is amazing. And like I said, I respect her writing and all it conveys. I respect her faith. I have read many of her letters and personal journal entries. We read some of the prayers she wrote as part of a recent spiritual writing course I took, and I thought they were wonderful.

In this article, the author, Jane Townsend, compares the playwright Martin McDonagh to Flannery O'Connor.


Not unlike Flannery O’Connor, McDonagh bequeaths his protagonists and antagonists with dysfunctional moral compasses and ample negative or at least questionable qualities so that viewers can’t always be sure who the “good” and “bad” guys are. He sends his (anti)heroes into wayward explorations of themselves, others, the world, the possibility that this world is not where reality stops—he corners them against the hope for hope, although this tends to look more gruesome on screen than it sounds in a sentence. Their crooked stories of growth and decline, sin and forgiveness build with intensity and macabre hilarity, fracturing into sincerity and tenderness sometimes without warning, immediately spiraling into more quips and shootouts and impeccable soundtrack selections. The courses on which his characters find themselves reveal the spaces, in their lives and ours, where grace hangs indomitably overhead before collapsing over our skulls, altering forever the horizon before us and hardly being gentle about it. 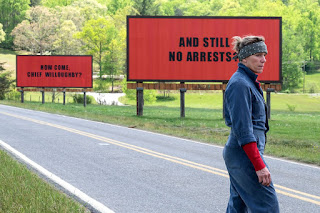 I was not familiar with the name Martin McDonagh. I've discovered lately, though, that I am kind of a movie nerd. I saw one of McDonagh's movies, "Three Billboards Outside Ebbing, Missouri" (2017), and I thought it was great. I plan to watch the others Townsend mentioned.

I'm not exactly sure why I don't like Flannery O'Connor's stories but I do like McDonagh's, whose writing is similar, at least according to this author. It will be a fun project to watch the other movies and think that over.
Posted by Mavis at 12:23 PM