A returning, and always being there

Sometimes something strikes me in a pretty big way, then rolls around for days -- like something weighted to float around underwater -- and then it resurfaces periodically with new insights, questions or associations. A little while ago I wrote about my mind being blown by the thought that our soul is in Christ.

Earlier, the mind-blowing thought that my soul is in Christ, and so are the souls of many others, both before, during, and after life, suddenly resurfaced with the thought: Wait, that means while I'm living I am (or my soul is -- isn't that the same thing?) communing with others who are not living yet, or anymore. What does that mean? Talking to people who have died is not so strange then, right? And death isn't all about my soul leaving my body. My soul is already in Christ.

Today I listened to an interview of a man who survived a terrorist attack. He was on a train in Peru and a bomb went off in the luggage rack above him. People around him were killed and his body was torn apart, but he survived. As he talked about his truly near-death experience, you could tell he was struggling to describe it:


I went into whatever the tunnel of light is. I actually went into that, which was interesting - it really was a light of shades of gray, and the light at the end was a tiny light - really, not very big, but it was a light that was - it was like a returning, like I was returning and becoming some sort of liquid light. It was more like an ecstatic return, but ecstasy is not the right word. It was like a cellular becoming of something more powerful and beautiful than anything I've ever experienced.

I don't think we have a word for it.


A returning. That fits right in, doesn't it? Our soul is in Christ even while we're living. Somehow we're already there, but during life, it's different. We don't feel there. And when we die, we return there. 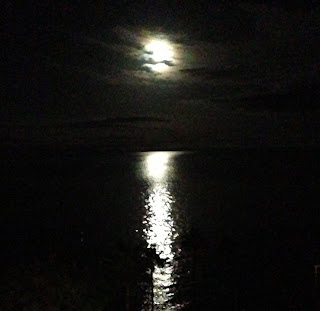