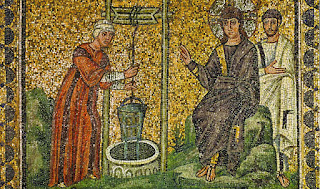 Well, I don't know what's going on, but I KEEP seeing and hearing references to this story of Jesus talking with a Samaritan Woman (verses from Bible Gateway below). I decided to write about it.

I read our granddaughters Bible stories using some really cute books that come in a box. It's called God Loves Me Storybooks, the Bible in 52 Storybooks, The story of the Samaritan Woman at the well came up the last time I read one of those! And that was after I had already seen several other references to it. Then the Bible study I'm going to had a lesson on this story last night. And today I was going through my "Feedly" (a collection of blogs I read) and there was another one, a sermon by Nadia Bolz-Weber.

So, after all those "signs," I wondered whether there was something special I should try to glean from it. I've heard the story, of course, and never thought too much about it. I have a friend who suggested I re-read the story of Hagar and Ishmael when they try to escape because there are similarities and perhaps ties to this story, especially around the woman being seen by God. My sister suggested I re-read it and sit quietly receptive to insights that might come to me. Both of those are good ideas.

In the story of Hagar there are these verses, which talk about being seen: "She gave this name to the Lord who spoke to her: “You are the God who sees me,” for she said, “I have now seen the One who sees me." (Genesis 16:13) And as we studied and read the story of Jesus talking to the Samaritan woman, it was significant that Jesus spoke and associated with a woman, which was unusual in itself, and on top of it a Samaritan. A parallel to Jesus seeing this woman, like Hagar being seen. It is good to reflect on the fact that Jesus/God sees me.

I've been thinking a lot lately about what I want to do with the time I have left in life, and it is good to know God knows what is in my heart. He sees my innermost being. To be honest, I wish I could see it! I can't decide what to do with. I figure I don't have to make a decision that necessarily is definitive for the rest of my life, but I'd like to know a direction, a goal to pursue, the next step to take. Right now I'm trying to be patient as I think and pray of various things and wait for something to seem like the direction God wants me to go in. I signed up for a 5-day guided retreat at the Jesuit center that I am hopeful may help me.

Here are some thoughts that go around in my mind:


So there you have a lot of what's on the top of  my mind right now. Does the woman at the well story have any bearing on that? Not so sure. I am also drawn to the references of "Here I am" in the Bible. I have written a little about that before, and just saw it again in a reference to Mary saying it when the angel told her she was going to become the mother of Jesus. I feel like I am in a "Here I am" moment.

I recently started following Paul Vander Kley in social media. I like what he says about his blog being a working space. I was feeling a little bad that my writing on my blog is so informal. I don't edit much at all. It's kind of my "shitty first draft," as Anne Lamott would say, or it's just plain a stream of consciousness. I read a lot about writing and writers all talk about writing being more about editing and re-work than anything else. But I feel better thinking as Paul writes, that my blog is a workspace, not finished work. And, as he says, I don't get much traffic so I don't need to worry about it.

If anyone who does take the time to read this has any thoughts, I'm open.

Jesus Talks With a Samaritan Woman

4 Now Jesus learned that the Pharisees had heard that he was gaining and baptizing more disciples than John— 2 although in fact it was not Jesus who baptized, but his disciples. 3 So he left Judea and went back once more to Galilee.
4 Now he had to go through Samaria. 5 So he came to a town in Samaria called Sychar, near the plot of ground Jacob had given to his son Joseph.6 Jacob’s well was there, and Jesus, tired as he was from the journey, sat down by the well. It was about noon.
7 When a Samaritan woman came to draw water, Jesus said to her, “Will you give me a drink?” 8 (His disciples had gone into the town to buy food.)
9 The Samaritan woman said to him, “You are a Jew and I am a Samaritan woman. How can you ask me for a drink?” (For Jews do not associate with Samaritans.[a])
10 Jesus answered her, “If you knew the gift of God and who it is that asks you for a drink, you would have asked him and he would have given you living water.”
11 “Sir,” the woman said, “you have nothing to draw with and the well is deep. Where can you get this living water? 12 Are you greater than our father Jacob, who gave us the well and drank from it himself, as did also his sons and his livestock?”
13 Jesus answered, “Everyone who drinks this water will be thirsty again,14 but whoever drinks the water I give them will never thirst. Indeed, the water I give them will become in them a spring of water welling up to eternal life.”
15 The woman said to him, “Sir, give me this water so that I won’t get thirsty and have to keep coming here to draw water.”
16 He told her, “Go, call your husband and come back.”
17 “I have no husband,” she replied.
Jesus said to her, “You are right when you say you have no husband.18 The fact is, you have had five husbands, and the man you now have is not your husband. What you have just said is quite true.”
19 “Sir,” the woman said, “I can see that you are a prophet. 20 Our ancestors worshiped on this mountain, but you Jews claim that the place where we must worship is in Jerusalem.”
21 “Woman,” Jesus replied, “believe me, a time is coming when you will worship the Father neither on this mountain nor in Jerusalem. 22 You Samaritans worship what you do not know; we worship what we do know, for salvation is from the Jews. 23 Yet a time is coming and has now come when the true worshipers will worship the Father in the Spirit and in truth, for they are the kind of worshipers the Father seeks. 24 God is spirit, and his worshipers must worship in the Spirit and in truth.”
25 The woman said, “I know that Messiah” (called Christ) “is coming. When he comes, he will explain everything to us.”
26 Then Jesus declared, “I, the one speaking to you—I am he.”

27 Just then his disciples returned and were surprised to find him talking with a woman. But no one asked, “What do you want?” or “Why are you talking with her?”
28 Then, leaving her water jar, the woman went back to the town and said to the people, 29 “Come, see a man who told me everything I ever did. Could this be the Messiah?” 30 They came out of the town and made their way toward him.
31 Meanwhile his disciples urged him, “Rabbi, eat something.”
32 But he said to them, “I have food to eat that you know nothing about.”
33 Then his disciples said to each other, “Could someone have brought him food?”
34 “My food,” said Jesus, “is to do the will of him who sent me and to finish his work. 35 Don’t you have a saying, ‘It’s still four months until harvest’? I tell you, open your eyes and look at the fields! They are ripe for harvest. 36 Even now the one who reaps draws a wage and harvests a crop for eternal life, so that the sower and the reaper may be glad together. 37 Thus the saying ‘One sows and another reaps’ is true. 38 I sent you to reap what you have not worked for. Others have done the hard work, and you have reaped the benefits of their labor.”

39 Many of the Samaritans from that town believed in him because of the woman’s testimony, “He told me everything I ever did.” 40 So when the Samaritans came to him, they urged him to stay with them, and he stayed two days. 41 And because of his words many more became believers.
42 They said to the woman, “We no longer believe just because of what you said; now we have heard for ourselves, and we know that this man really is the Savior of the world.”