I just finished the book The Arsonist by Sue Miller. I reviewed it briefly here. There's a passage in the book about the main character's (Frankie's) motivation for doing aid work in Africa. Her romantic interest, Bud, asks her about her religious background and Frankie says:


Protestant. My mother's religion. Actually my grandparents' religion. My grandfather was a preacher. Presbyterian. And we used to to go church regularly,...So I was a churchgoer. But not ever a believer, even in my memory...

...I think they would have had me believe. We did the whole thing early on. Sunday school. Confirmation class...But I was a gimlet-eyed kid. I saw hypocrisy everywhere around me among the grown-ups, who were always on about honesty and kindness, not hitting, et cetera, and yet were so much not up to the job themselves...And then there was God--such an unattractive character! Why be so jealous, so small with the whole universe your own? And why call on us to be so good--so giving, so forgiving, so open and sweet, when you hardly model that for us. 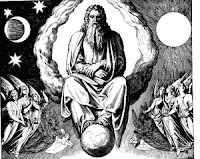 Wow.  Vengeful. Small. Unattractive. I've heard the whole thing about hypocrisy many times. But I can't remember hearing this description of God. I kind of don't know what to think, how I'd respond if someone said that to me.

What do you think?