A Foretaste of Heaven

Somehow as a child I remember getting the impression I was being told that church -- going to church -- was kind of a preview of what it would be like in heaven. I can't say I thought that sounded so great. To me, church was pretty boring. I liked the singing all right. Sometimes it was nice because I got to see friends. But I became an expert at tuning out most of the service, especially the sermon. I remember once when I was in high school thinking to myself, "Maybe if I listened, I'd understand what the minister is saying." What a concept. I spent years figuring there was no use listening because he'd use big words and talk about stuff that I couldn't understand.

I like to think I'm more mature now. At any rate, I do enjoy church much more, and even look forward to it. Last week I was thinking about the process of going through the various parts of the service such as the call to worship, the greeting, the prayer of confession, the words of grace and so on. During the confession I'd felt convicted. I related to what we were confessing, and how often I failed to live up to being a reflection of God. Then I was comforted by the words of grace.

During the sermon that happened, too, when I heard about how Jesus loved all, even "seedy" people like prostitutes and tax collectors, and the parable of the banquet when we're told to invite "the poor, the crippled, the blind and the lame." I realized how often I dismiss people based on their societal stature, or how much I sometimes invest in growing my own reputation in others' eyes. But the good news is we are all invited to God's table.

Thinking about this, I was reminded of scenes in C.S. Lewis' The Last Battle and the other books in the Chronicles of Narnia series. Often, when someone would come face to face with Aslan, their first reaction was guilt and fear. Suddenly they realized all their own failures and felt they were not worthy. But Aslan would breathe on them, or whisper to them, and transform them to creatures who were confident and content in the fullness of his love.

In this way, church is a foretaste of heaven, isn't it? We realize our own unworthiness and then become renewed and refreshed as we receive God's words of comfort and grace. 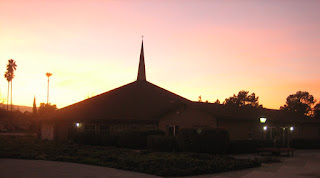