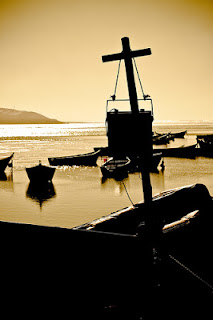 Yesterday's sermon was based on Luke 5:1-11, where Jesus calls his disciples. Peter is still called Simon there. Peter reminds me of me. In this story, when Jesus tells him to put his nets out, Peter first has to let him know that they've already done that and it didn't do any good. I tend to do that -- make sure I get my potential "I told you so" setup, you know? So Peter says, "Master, we’ve worked hard all night and haven’t caught anything. But because you say so, I will let down the nets." Right. "OKaaaay, since YOU say so."

And then, of course, there's definitely no I told you so happening from Peter. And Jesus -- well, he IS Jesus after all -- doesn't say it, either. But those nets get filled with fishes, overflowing, nearly breaking them. And then Peter's actions take a huge pendulum swing. "...he fell at Jesus’ knees and said, 'Go away from me, Lord; I am a sinful man!'”

Oh Peter, you're a man after my own heart. I'm so glad you are in the Bible. It just shows you, if Jesus could love Peter, he can love me, and you and all of us.

Once I started to gather all the passages I could find with Peter in them. Story after story he proves Jesus loves us in spite of ourselves. Peter gets out of the boat full of confidence and faith,...then loses it. Peter says "You are Christ, son of the Living God" and Jesus tells him he'll build his church on this Rock. Peter says he'll never, ever deny Christ, and then he does..three times! But after all those failures, Peter is filled with the Holy Spirit and Jesus does use Peter, and he does build his church with him. There's hope.
Posted by Mavis at 5:48 PM